I've always admired and respected Arthur Miller's play Death of Salesman, but I didn't fully grasp the brilliance of it until the 2007-2009 economic meltdown and Great Recession.
In case you haven't seen it or read it, here is a synopsis: Willy Loman, the main character, is a salesman who had put his faith in the American Dream. To make matters worse, he had also put his complete faith into being, in his words, 'well-liked'. He's the proverbial 'pleaser of man'  or in modern-day terms, a 'people pleaser'. But at the end of his life, his dream of success had failed to materialize and in the world's system, he's considered a loser. His misplaced faith has tragic consequences and ultimately leads to his suicide.
Willy Loman was never a real person but the truth conveyed by his character and story struck such a collective nerve that the play became an instant classic when first performed and is still talked about and produced today. To Arthur Miller's credit, it is a well-crafted story that works on many levels. Here is just a thin cross-section of what one person sees in it. The play simultaneously conveys a timeless truth ("There is a way that seems right to a man, but in the end it leads to death." Proverbs 14:12; "Woe to you if everyone speaks well of you" Luke 6:26) among other themes such as: the world and its materialism will fail you. It also identifies a respectable form of slavery that we're all susceptible to and perhaps most insightful and brilliant (and daring for Miller's time) the play also draws attention to suicide and connects the American Dream to death. 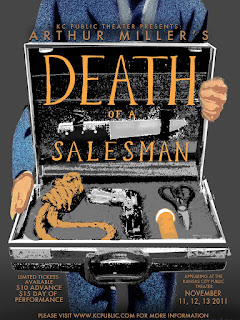 If you don't believe our culture - which emphasizes the American Dream and success by almost any means - has a shadowy underbelly of suicide, just look at the statistics and the epidemic of addiction (which is a slow form of self-destruction and suicide.) And given the state of our times, aren't we, in some sense, collectively self-destructing? As individuals, we like to believe that we aren't as vulnerable and pathetic as Willy Loman, but if you look hard enough, you will find the seeds of disappointment and/or self-destruction in your own life. We've all had the experience of putting too much faith in the wrong things such as a wrong relationship, a job, a promotion, a house, etc. with bitter or disappointing results. I have to admit I can be a Willy Loman - I often want to be 'well-liked' by others ("for they loved the glory that is of men more than the glory that is of God." John 12:43) The play works and captivates audiences because we're all Willy Lomans to some degree or other.
This is all pretty impressive considering Death of a Salesman premiered in New York in 1949 at a time when Americans were just beginning to embrace perhaps the most optimistically materialistic, consumer-driven aspect of the American Dream. It's hard not to cry at the end of the play or at least be moved or disturbed because we each see ourselves in Willy Loman. And maybe in 1949, in the skillful portrayal of one American salesman's death, audiences also had a premonition of our future doom and disillusionment.

(On a milder side note, Julian Moody and I briefly discussed 'people pleasers' in the topic "Authority, Responsibility, and Accountability" in our project Dialogues with Julian Moody: On Life, Business, Sustainability, and Other Things. We also touched on the subject of consumerism in the topic "Can There Be Too Much Competition?")

(Posted 2/8/2012)
This site gets visitors from all over the world! Many of Brandy's posts have become evergreen posts which enjoy wide and continual circulation. If you like what you read, Brandy would love to hear from you. Please say hi and where you're from via the contact form (mail icon on the right.) You can also join her email list through this form. Put "email list" in message.