Many who live in southeastern Santa Barbara County are aware of a white Moorish-style oceanfront property complete with minarets and domes called Casa Blanca in the western end of Carpinteria. Anyone can see it from the beach during very low tides or catch glimpses of it behind Santa Claus Lane while driving down the 101. It looks so out of place, the style so incongruent with the area, I would often wonder what rich eccentric built it and why. I imagined that maybe in a romantic, Taj Mahal fashion it was designed and built for the love of someone’s life. Not so.
Casa Blanca was built in the 1920s by a rich Gatsby-type party boy named Albert Keep Isham, who, like F. Scott Fitzgerald, was known for his drinking and unrestrained lifestyle. Casa Blanca became a happening spot for parties, housed a secret bar during Prohibition, and was a “rest stop” for the Hollywood jet-set on their way up to Hearst Castle. Isham didn’t enjoy his lifestyle for long. Due to his excessive drinking, he died at the age of 37 in 1931. After his death, Casa Blanca fell into disrepair and the main house was destroyed in a winter storm. After sitting abandoned for years, the property was eventually restored and converted into multiple luxury residences. 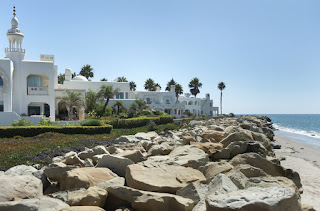 Recently, while watching an old episode of Columbo, I could swear that the setting for the villain’s exclusive, high class fat farm (where chubby rich women went to “reduce”) looked just like Casa Blanca. Many of the external shots of coastline and roads looked familiar to me as well, so I did some research and sure enough, that episode, called “Lovely but Lethal“, was filmed in the Carpinteria and Ventura areas and the fat farm segment, including its pool scenes, was shot at Casa Blanca. Why was I watching Columbo? Columbo was my mother’s favorite TV show. (She passed away in 2002.) I didn’t like Columbo as much as she did, but now, because of this sentimental association, Columbo has become my favorite tv comfort food which I indulge in occasionally like some people will watch episodes of I Love Lucy or Lassie when feeling down or burned out.

Columbo first appeared on tv in 1968 as a pilot and had an unusually long run, from 1971 to 2003, on NBC and ABC. It was highly regarded in its time and many prominent actors, writers, and directors got their start on that show. Season 1, episode 1 in 1971 was directed by Steven Spielberg. Even Johnny Cash starred in an episode called “Swan Song” as an ex-con televangelist singer who is driven crazy by his corrupt, blackmailing wife and murders her.
I’m not a big fan of television so never thought about Columbo much, but once when dropping into a mystery workshop at the Santa Barbara Writers Conference some years ago (I don’t write mystery but always enjoy hearing what writers say about their craft), the subject of tv detective shows came up. The instructor pointed out every episode of Columbo is a David versus Goliath type metaphor. The villain is always sophisticated and powerful in some way—whether rich, influential, a respected pillar of society, a CEO of a company, a genius in a Mensa-type organization, or a popular celebrity—they’re always a “giant” in some way. Meanwhile Columbo, a detective with the LAPD, is short, unimpressive-looking with a wall-eye, drives a jalopy, wears the same worn-out overcoat over and over again, and often seems clueless. In one episode, a nun in a soup kitchen mistook him for a homeless man and served him a bowl of soup which he casually accepted and ate. I think that was one of the things that appealed to my mother about him. His scruffy nonchalance. I didn’t understand why she liked him so much at the time, but now I do. Columbo often appears out of it or naive and asks a lot of stupid, annoying questions. He sort of reminds me of my friend Julian Moody and his work, although the context is different (or maybe not so different.) When questioned by Columbo, the villain is initially smug, confident as if they could never be brought down, especially by the likes of Columbo, but they increasingly become unsettled and eventually they are brought down, usually on some small detail. As my mother often remarked, “He always seems stupid, but he’ll get him (or her)!”
Even though you know Columbo will ALWAYS win in the end, it’s never boring to watch. I puzzled over that fact and then realized one of the reasons it’s gripping is because the viewer can simultaneously identify with both Columbo and the villain. While most of us aren’t literal murderers or criminals, we’ve all been prideful and selfish, we’ve all wished ill on others, and/or “lost it” in a fit of anger or arrogance and helped create an unpleasant scenario which we’re desperate to get out of (which of course is indicative of our fallen nature. Or in more unpopular terms, we’re all sinners. Some people deny this, but that’s like saying evil doesn’t exist.) At the same time, you root for Columbo as he works to solve the crime. As the instructor of the mystery workshop explained on the enduring appeal of the mystery and crime genre, when someone is killed, the moral fabric of society is torn, a violation and grave injustice has occurred. Regardless of belief or background, people long for justice when there is such a crime. They become obsessed with solving the murder and bringing the killer to justice. They want truth and justice to prevail. This earnest longing and enduring desire for justice means sin and evil are very real, and I think it’s also comforting evidence that we’re made in the image of God. There are many names for God in Hebrew, reflective of the many aspects and attributes of an awesome God, one of which is Elohim Mishpat, God of Justice, from Isaiah 30:18 “Therefore the Lord longs to be gracious to you, And therefore He waits on high to have compassion on you. For the Lord is a God of justice; How blessed are all those who long for Him.”

Even though my mother watched many episodes of Columbo, which are more or less predictable, she never grew tired of him and I’m finding I don’t either. I think what she most loved about Columbo, and what I enjoy and appreciate, is his warmth, pleasant demeanor, and graciousness—you sense compassion in him. Even though Columbo senses or knows pretty early on who the murderer is, and although not pleased about the unfortunate choices this person has made (and not compromising justice), he is always friendly, gracious, and kind to the murderer.
So what’s the point of all this? Nothing other than I like quirky local history and Columbo and I love my mom and God and I want to enjoy all of that on Mother’s Day instead of missing her.