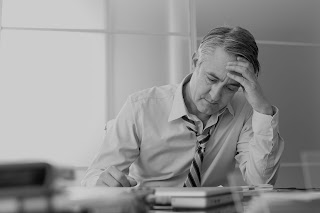 I know someone who is a pastor in Roatan, Honduras. When he was spending time in the United States, he was flabbergasted by the number of people who sought counsel from him because they were suffering from depression and/or anxiety. He thought, "What is this 'anxiety' and what is this 'depression'? I never heard of such things. My country is so poor, but no one suffers from this 'anxiety' and 'depression' in Honduras!"
Having traveled to many countries in a short period of time, I have to say, my first impressions (which tend to stick) back up his experience. The extreme poverty in third world countries is startling and disconcerting to witness, but no one looks more miserable and lost than they do in first world countries, especially in major cities, where many people look like vampires forced to walk around in daylight. People in poor countries look glowingly healthy and ecstatic in comparison.
Our custom in first world countries is to sponsor people in third world countries. I wonder, is the reverse, in the form of spiritual charity, possible? For example, a person in a third world country receives a forlorn-looking photograph of an anxious, depressed white person in the United States. Along with it, there is a description of his or her life (works in a florescent lit office, stares at a computer screen all day, commutes 2-3 hours per day, feels no joy, can barely get out of bed, on multiple prescription meds, spends time in bars and sleeps around hoping to get relief, etc.) And once a month, the person in the third world country writes an encouraging letter to the person in the first world country along these lines:

Dear Lost Soul in a Rich Country,
The person tried to explain it, but I did not understand and it saddened me this suffering I could not comprehend, this disease of the spirit you have - a heavy sadness that never lifts even when there is sunshine and food and water. It brought tears to my eyes to hear of your tragic suffering To have so much of everything - a job, a home, a family, children, to experience that as a prison - what a sad, unspeakable, unfortunate disease. What this says for you and us, I do not know. Some clever sounding people are trying to help our country become "industrialized" because this is supposed to make us as affluent as you - but if this is the suffering that you endure, maybe these people are not so wise. I think of you often, so do not lose hope. As I sit in my shelter made of a bedsheet and eat my little meal of beans and rice, I will look at your photograph and sincerely pray for you that this dark curse be lifted from you and God smiles his peace, joy, and compassion onto you.
Signed,
Your Friend in a Third World Country