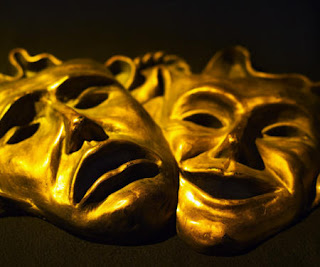 The master actor and storyteller Charlie Chaplin once observed: the mark of an idiot is all feeling and no intellect, and the mark of an arch-criminal (or sociopath) is all intellect and no feeling.
The two extremes - all feeling or no feeling - present problems, no one can argue. Some balance of emotions is needed along with emotions themselves - life (and for that matter storytelling) would fall flat without them. So why are emotions so often judged and feared? And have we become increasingly numbed and deadened to feeling? Some argue that one of the reasons actors, storytellers, and especially moviemakers are so highly paid and respected in our society today (people in the dramatic arts used to be considered low-lifes) is because of their skill in conveying and creating emotional response. The argument essentially goes - we have become so deadened and deprived of emotional expression in the grind, rat race, and busyness of modern times, that the only time we feel alive is when we watch movies. Whether you agree with this or not, it's certainly something to think about.
So are emotions (or a lack of emotions) a problem in modern times?

(Management consultant and executive coaching pioneer Julian Moody and I discuss the issue of emotions in the business world in the topics: "The Mystery of the Automobile Company Widget" and "The Engineer Who Claimed, 'There is no such thing as emotions'." These topics are part of our project Dialogues with Julian Moody: On Life, Business, Sustainability, and Other Things.)