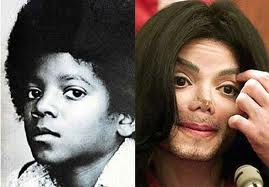 It has been a few years since Michael Jackson died, but my thoughts turn to him off and on. Maybe it's because Neverland Ranch is in Santa Barbara county, where I live, but I think more so because his death has an unresolved quality and haunts me.
Michael was obviously a broken, troubled, unbalanced person - the drug dependence, strange behavior, plastic surgery to the point of disfigurement, among other things. Many people mocked him for this, but few seemed to ask or care why. The observation most repeated about him was that he never had a childhood, but there was actually very little inquiry into this fact. He was either worshipped as a celebrity, or reviled as a freak. Very little attention was given to him as a human being.
Upon Michael's death, his personal physician was made the villain, but in truth, the seeds of Michael's self-destruction were planted and watered early on. The most insidious seed, a false belief. By becoming a professional performer at such an early age, Michael was conditioned to believe, either directly or indirectly, that love is earned through performance and being a celebrity, rather than available unconditionally, a belief that was tragically reinforced by a series of record-breaking successes. His personal physician was just one villain in a series of many villains who encouraged, exploited, or never corrected this false belief. These include: his parents, business associates, hangers-on seeking an opportunity, various enablers, etc. And as Michael's success faded and died, it was like he began to fall apart and die, because the shaky, unreliable foundation of his self-worth had begun to disappear. As in the Picture of Dorian Gray, the public image eventually showed what was going on within.
In Old Testament times, idolators of the worst kind actually sacrificed their own children - babies were literally burned alive on altars. Many people think idolatry existed only in ancient times, but it is still alive and well today in more deceptive, insidious, and seemingly benign forms. We as humans (and I include myself in this critique) are so pathetically insecure and so lust after fame, money, celebrity, power, recognition, intellectual laurels, awards, status, etc., the relentless pursuit of these things is the idolatry of our times. Michael's childhood and true self (and ultimately his life) were essentially sacrificed on the altar of Fame, Celebrity, and Money. But sadly, we are so self-absorbed and so obsessed with our own pursuit of false gods and false security, we don't even notice or care.

(Julian Moody observed a less dramatic form of this "child sacrifice" in his business experience -  true selves were often sacrificed under the pressures of parents and/or culture resulting in extreme unhappiness. See topic "Unhappy People and the Positions They Find Themselves In" in Brandy's and Julian's project: Dialogues with Julian Moody: On Life, Business, Sustainability, and Other Things.)

(Posted 8/19/2011)
This site gets visitors from all over the world! Many of Brandy's posts have become evergreen posts which enjoy wide and continual circulation. If you like what you read, Brandy would love to hear from you. Please say hi and where you're from via the contact form (mail icon on the right.) You can also join her email list through this form. Put "email list" in message.