Yom HaShoah or Holocaust Remembrance Day, as it is observed in Israel, this year begins on the evening of May 4th and ends on the evening of May 5th. I’m not Jewish, but I am choosing to commemorate it on my site this year because it’s always good to be reminded of history and how easy it is to flirt with darkness and get drawn in, especially considering the troubling public infatuation with Trump as a presidential candidate and the mob mentality at his rallies. For me, World War II is not a remote history lesson, something I learned sitting in school or watching the History channel, but a gritty, visceral reality—I spent countless hours with Julian Moody, a real World War II veteran, as he shared his experiences and showed me the many photographs he took during his service. I could see that Julian was deeply affected by the war and it was still with him after many decades. The word he used often to describe it was “epic” and I definitely had the sense of huge forces of world history playing themselves out on a grand scale, and his participation in this was not something to take lightly. No, we may never have a literal Holocaust of the type in World War II in America, but the root of evil can take many forms—the hatred, fear, and intolerance that lurks beneath the veneer of any civilization along with any sociopathic tendencies in a leader can quickly metastasize into senseless chaos and destruction that is hard to stop once it is fed by public hysteria and gains momentum, as was painfully learned in World War II.

I have been blessed to come across two striking first person, nonfiction accounts of that era: Diary of a Man in Despair by Friedrich Reck and The Man Who Broke Into Auschwitz: A True Story of World War II by Denis Avey. I would recommend the books to anyone interested in learning more about that dark period in our history. I read the books last year since 2015 marked the 70th anniversary of the liberation of Auschwitz and even though that was many months ago, I thought back to the books often. The quality of writing in both books is especially notable, and the insights gleaned also serve as a warning on the current political climate. 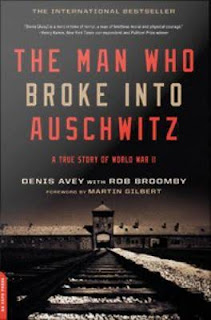 
(Posted 5/4/16)
This site gets visitors from all over the world! Many of Brandy's posts have become evergreen posts which enjoy wide and continual circulation. If you like what you read, Brandy would love to hear from you. Please say hi and where you're from via the contact form (mail icon on the right.) You can also join her email list through this form. Put "email list" in message.